The new Set-Top Box gaming service is launching as part of a broad collaboration between Partner TV and Blacknut and it will be available to all Partner TV customers.

Partner TV, part of Partner Communications, the leading telecommunications group in Israel, has been working with cloud-gaming specialist Blacknut to launch its new cloud gaming service called Partner TV Gaming Powered by Blacknut. The new service will offer more than 400 family-friendly premium games, including genres such as action and combat, aerospace, car racing, classic and extreme sports, adventure, logic and others. 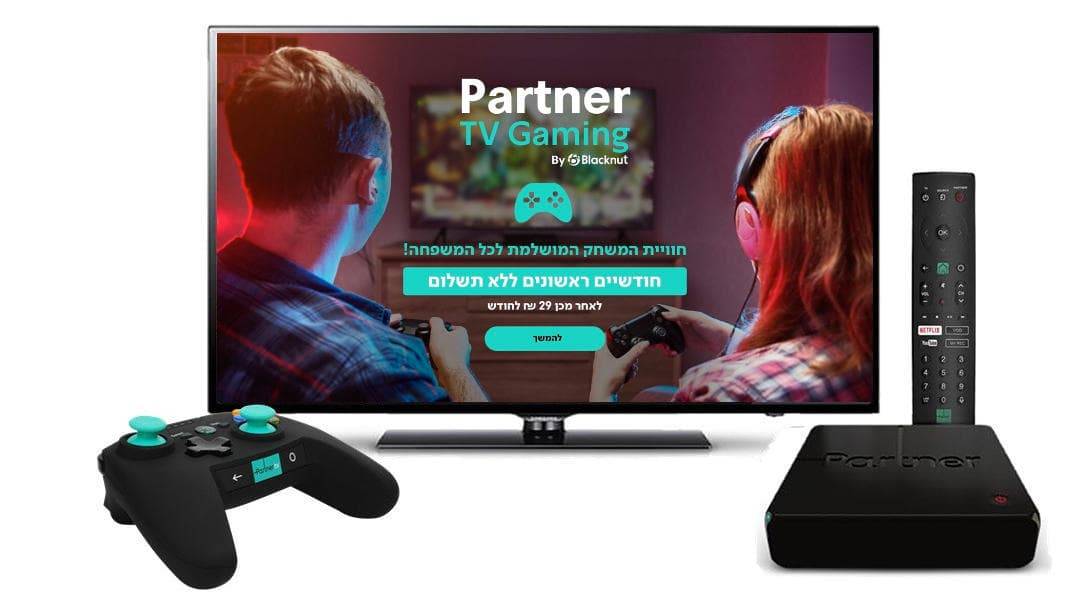 After examining a number of cloud gaming services over the past year based on various parameters such as game variety, response speed, and interface usage experience, Blacknut was selected as the game application provider for the new service. Partner TV then carried out a successful pilot, after which the service will soon be released to all Partner TV customers, with access to the service available directly from the subscribers’ converter interface. The subscription will give customers unlimited access to 400+ games and a growing library of premium PC and console games every month.

The Super-Aggregator approach that Partner was the first to introduce in the Israeli market, has led Partner TV to being the fastest growing television service in Israel for the past three years. This launch of the Partner TV Gaming service powered by Blacknut on Partner’s STB, is part of the Super-Aggregator strategy we have chosen. In recent months, we have launched bundle offers with Netflix for our TV customers, added a simple access to Spotify following the increasing use of music services on TVs, and now we are excited to add a gaming service.

With 2.7 billion people playing games, gaming is one of the most popular forms of online entertainment meaning there’s a huge opportunity for telecommunications companies to launch their own gaming services built specifically for a family-orientated audience.
We’ve worked with Partner TV over the past year to create a service that offers the right mixture of performance, user experience and a catalogue of more than 400 quality games, and we’re excited to see it launch.

Established in 2016 and launching its cloud gaming platform in 2018, Blacknut is a leading cloud gaming provider that enables ISPs, device manufacturers, OTT services and media companies to quickly launch their own streaming games services, having contributed to the launch of similar services like TimGames in Italy or Swisscom in Switzerland.

Partner TV Gaming Powered by Blacknut will be offered to Partner TV subscribers for a monthly fee of 29 NIS, with the first two months free. The games are compatible with game controllers provided by Partner as well as game controllers from other popular game consoles.

About Blacknut - www.blacknut.com
Blacknut is the world's leading pure player cloud gaming service dedicated to the general public, distributed both direct to consumers and B2B through ISPs, device manufacturers, OTT services & Media companies. Blacknut offers the largest catalogue of +500 premium games carefully selected for the whole family, all included in a monthly subscription. The service is now available across Europe, Asia & North America on a wide range of devices, including PC, mobiles, set-top-boxes and Smart TVs. Blacknut was founded in 2016 by Olivier Avaro (CEO) and is headquartered in Rennes, France, with offices in Paris, Seoul and San Francisco.

About Partner Communications
Partner TV is an OTT service operating in Israel, part of Partner Communications, a leading Israeli Telecommunications Group. Partner TV is the fastest growing TV service in Israel since launched on August 2017, and was named 'TV app of the year' by VideoTech Innovation Awards for 2019. Partner’s ADSs are quoted on the NASDAQ Global Select Market™ and its shares are traded on the Tel Aviv Stock Exchange (NASDAQ and TASE: PTNR).